The video of a bunch of US Soldiers in black helicopters shooting the living shit out of civilians in Iraq is old news now, I guess. WikiLeaks released it almost two days ago: Collateral Murder. Alternet uses this clip in their story:

That's about all the information I needed. I haven't watched the longer video because it will make me cry.

When I was pregnant with Velvet, I was looking at CNN one night and eating Tatertots when the first ground war in Iraq broke out. Some folks around a table were argufying about something, when Bernie Shaw, Peter Arnet and Wolf Blitzer interrupted the broadcast to bring us live action war. 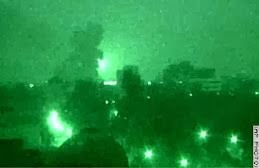 Being pregnant and distressed about the fate of my unborn child, I cried so much I didn't even finish my tatertots. Life went on and brought us more war. Maybe it's worse these days than in previous generations, but more likely we just have more extensive records.

They had journalists back in the 60's, too. 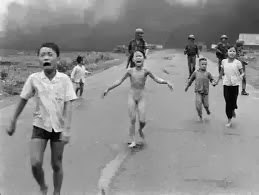 The horrors of war is very old news. A few folks had cameras in Nagasaki back in 1945, 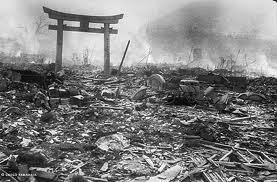 and in May, 1863 to document dead guys in the American Civil War: 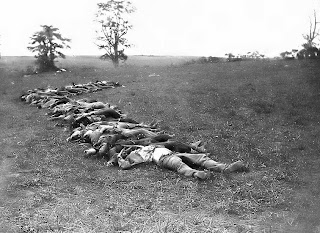 The day before WikiLeaks released the latest installment in the horrors of war was the anniversary of the assassination of Dr. Martin Luther King, Jr. In 1967, Dr. King spoke out against the Vietnam war at Riverside Church. As it happens, I spend a lot of time around that progressive institution because of my work. Bill Moyers is a member at Riverside Church, and he recalls Dr. King's sermon in an article he recently published with Michael Winship (Dr. King's Economic Dream Deferred).


A year before, at Riverside Church in New York, he had spoken out -- eloquently -- against the war in Vietnam. King said, "A nation that continues year after year to spend more money on military defense than on programs of social uplift is approaching spiritual death," a position that angered President Lyndon Johnson, many of King's fellow civil rights leaders and influential newspapers. The Washington Post charged that King had, "diminished his usefulness to his cause, to his country, and to his people."

On April 4, 1968, Dr. Martin Luther King, Jr. was graveyard dead. That's old news, too. Meanwhile, Christians like the Hutaree are making news with comments like these in the Detroit News:


"Jesus wanted us to be ready to defend ourselves using the sword and stay alive using equipment ...," one of the group's purported leaders wrote on its Web site. "We, the Hutaree, are prepared to defend all those who belong to Christ and save those who aren't. We will still spread the word, and fight to keep it, up to the time of the great coming."

It's no surprise people are embarrassed to admit they are Christians these days, with Martin Luther King dead and gone and Christians like the Pope and the Hutaree spreading the gospel. There are certainly plenty of Real Christians around today. We just can't hear them very well because those bastards at C Street make so much noise.

I don't know what to make of that video from WikiLeaks. I'm sure those guys in the helicopters were no more malicious than those soldiers who shot the villagers in MyLai. 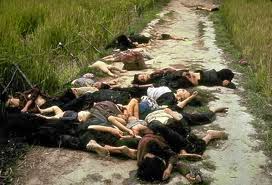 
I come to this magnificent house of worship tonight because my conscience leaves me no other choice. I join with you in this meeting because I am in deepest agreement with the aims and work of the organization which has brought us together: Clergy and Laymen Concerned about Vietnam. The recent statement of your executive committee are the sentiments of my own heart and I found myself in full accord when I read its opening lines: "A time comes when silence is betrayal." That time has come for us in relation to Vietnam.
The truth of these words is beyond doubt but the mission to which they call us is a most difficult one. Even when pressed by the demands of inner truth, men do not easily assume the task of opposing their government's policy, especially in time of war. Nor does the human spirit move without great difficulty against all the apathy of conformist thought within one's own bosom and in the surrounding world. Moreover when the issues at hand seem as perplexed as they often do in the case of this dreadful conflict we are always on the verge of being mesmerized by uncertainty; but we must move on.
Some of us who have already begun to break the silence of the night have found that the calling to speak is often a vocation of agony, but we must speak. We must speak with all the humility that is appropriate to our limited vision, but we must speak. And we must rejoice as well, for surely this is the first time in our nation's history that a significant number of its religious leaders have chosen to move beyond the prophesying of smooth patriotism to the high grounds of a firm dissent based upon the mandates of conscience and the reading of history. Perhaps a new spirit is rising among us. If it is, let us trace its movement well and pray that our own inner being may be sensitive to its guidance, for we are deeply in need of a new way beyond the darkness that seems so close around us (Beyond Vietnam: A Time to Break Silence, April 4, 1967),

I wish more Preachers and Christians would say something about War and Poverty. It's a tricky business since so many conservatives and tea baggers are preaching violence that anyone speaking out for peace and equity becomes a target. Makes me wonder who the terrorists really are - the ones who flew into the World Trade Center and gave George W Bush and them an excuse to start another war, or all those Stupid People with Guns who are silencing Secular Humanists and Real Christians?

The good news is that there is an emerging Christian movement aiming to take back the faith from the Religious Wrong. You can go to http://blog.sojo.net/ for a window into what's being ginned up.
The bad news is that too many mainline pew-sitters aren't interested in being part of this movement. Instead, they'd rather hold fast to the state religion established by the Roman Emperor Constantine back in 325 A.D. Granted, they'd never think of themselves in that way; but the truth of the matter is they've replaced the Roman eagle for the American eagle, while wrapping Jesus in their comforting, red, white and blue burial shroud. Any preacher who challenges their assumptions is signing on for trouble, which is what I did soon after 9-11. Though I admit the price I've paid pales in comparison to Dr. King's. Yet I've found it essential to champion the notion found in the initial Christian proclamation, not that war is a necessary evil, but that war IS evil. Plain and simple. It should be a no-brainer. We've got the pictures--and now videos--to prove it.

Oh my, such a moving history expressed here - the horror and senseless wars - you have displayed this with a raw brutal honesty that quite frankly is the best collective accounting of wr events I have ever seen in one writing. I am so amazed at your depth.

I like that Sojourners blog about God's Politics, JDHays. As always, I have faith since I spend my mornings surrounded by little kids who listen to me when I say, "that's not how we act." I can't help but wonder what this country would be saying about Afghanistan and Iraq if there were a draft, however.

Gail, I'm glad you think so.

PE, this is your best post...EVER. It leaves me speechless, in a good way. God girl.

I always take comfort in MLK's speeches. They always stir me to a higher calling, a more noble pursuit in life. I always find something deeply meaningful in them for my own life. That's what a Preacher's message should do.

JadedJ, you're making me blush.
V.V., I have to say it's really cool to work at a place where MKL preached. Nelson Mandela, too - and even Bill Clinton.
I'd go to church these days except (1) I don't really like to go to church and (2) I might run into my ex mother-in-law, Vagina Dentata. She sits up front in one of those hats that assures G*d can recognize you in the pew when S/he looks down from Heaven. Sheesh.

A fine, timely reminder. Wish this could be programmed into a few billion "Christian" dreams for, oh, maybe the next 20 years or so. 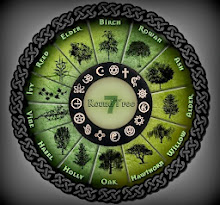